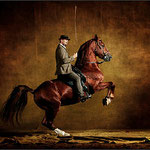 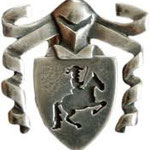 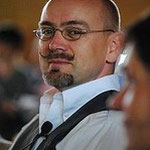 I was only one and a half years old when I surprised my grandfather with my answer to his question:" What do you want for christmas?". It was: "I want a horse!"

I was not quite satisfied when I got a toy horse, but I had to wait until I was a grown up to make this dream come true - over 20 years later....until then I had to get along with other animals.

I have always been fond of all kinds of animals and my mother allowed me to have them in the house. Here I am with a guinea pig. But I also had other kind of animals like mice, rabbits, cats, fish and hamsters. With all of them I started to breed and everytime I had too many animals I had to bring them to the pet-shop which I thought was quite sad. However, I also had the ability to cheat my mother by keeping or buying an already pregnant animal ;) For example my hamster got twelve babies!

Finally when I was six years old, I convinced my mother to let me start at a childrens riding shool.

When I was around twelve years old, I started to ride horses for the neighbours. In my hometown Aabenraa in Denmark we have a local sport called "ringriding", where all the famers are participating - more than 500 at a time. A lot of people needed someone who could teach their young horses to be ridden and go in a calm canter towards the ring.

Then I also began coaching. When I was around 14 years old I started to restore coaches and harnaisses. For this I used the Knabstrupper mare "Fru Fru" whom I educated myself.

I drove with her in a self-restored coach at several weddings. On this picture I am driving a coach belonging to the museum where I was working in all my spare-time.

After my student examination I traveled around Europe to study different horse cultures. My plan was to study ethnology, specialized on horses, therefore I met farmers who still used horses in Poland, rode with the chicos in Hungary and worked on a farm on Iceland. Here is a picture from a time where I crossed Iceland on horseback.

After the cold year on Iceland, coming to Spain was a step into paradise where the orange trees were growing in the streets...

Here I am training the stallion "Jerezano" at the Escuela Andaluza del Arte Equestre (one of the stables in the school is named after him) He was the first horse to introduce me to the Alta Escuela, the High school. I became a pupil of Don Alvaro Domecq and Don Javier Garcia Romero. After a few years in Spain I realized that I would never return to my studies and continued my journey visiting other masters of the Art of Riding, for example Nuno Oliveira in Portugal and later  Egon von Neindorff in Karlsruhe, Germany.

Old Prince,  "Stjerneprinsen af Vejrup KNN 74" was my first own horse and the first one I educated completely on my own. I got him cheap because he was on the way to the butcher. He was already 15 years old and he had health problems that were caused by the way he had been kept. He had an enormous personality. In the beginning I worked with him five times a day and already the year after we started in an intermediate dressage competition. I mainly educated him in circus exercises and rode shows all over Germany. On this picture you can see us in one of these shows. He became quite important for the German Knabstrupper breed, mainly because of the show-riding.

His last years he became a breeding stallion in Germany.

He is the grandfather of my Filur, who looked a lot like him.

All this led to the meeting with Hugin in 1988. A Knabstrupper stallion, seriously injured, with three legs broken in 1991 and later on in 1995 he went totally blind. Trough Hugin, I learned to use the Dressage for the Horse instead of using the Horse for the Dressage. In this picture from 2011 he is 25 years old.

My journey will continue by studying the old masters, learning from my horses, my pupils and scientific investigations in biomechanics.